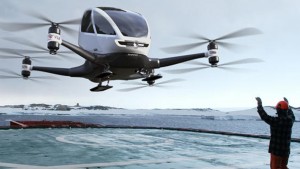 It seems as though the future is now upon us as Dubai’s dramatic skyline will soon be filled with passenger drones transporting tourists and commuters alike.

The autonomous helicopter taxi was unveiled two days into the World Government Summit in Dubai last month. The head of Dubai’s road and transportation agency said that self-flying taxis would start transporting passengers across the city from July… THIS YEAR!!

The city has lined up the EHang 184 for their new airborne taxi service. The compact drone is battery powered and can travel unassisted by us mere mortals for up to 31 miles, on journeys up to 23 minutes, carrying one person with hand luggage up to 100kg. It can travel at speeds of up to 63mph and takes 2 hours to recharge.

The Chinese made aircraft has a central passenger pod with 4 outstretched legs, mounted with two small propellers each.

Mattar Al-Tayer head of Dubai’s Roads and Transportation Agency explained: “This is not a model, we have experimented with this vehicle, flying it across Dubai’s skies”.

From the looks of it, this thing couldn’t be any easier to operate either… customers order their drone using an app which will see it land virtually at the door step then passengers are required to step into the small egg shaped pod and use a touch screen to select their destination. The drone will then be monitored from the ground by a control room.

Safety seems to be pretty much covered too, if the craft discovers any malfunction whilst airborne the craft will automatically land at a safe location!

So what do we think? would you like to travel in one of the worlds first flying cars? I think i will let others test it before I’m brave enough!